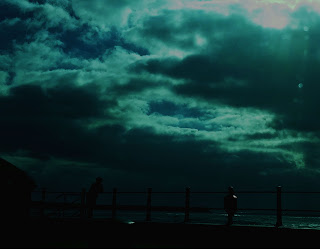 It had been a quite some time since I had walked the mountains but it seemed the memory of that cold invasive chill was enough to set me to shivering all over again.

Winter, it seemed, was doing its level best to hold on to the island as more days than naught I was required to clear ice from the windshield before starting the car, or snow from its bonnet.

The thing with Ireland is that if its cold there is ice, if its warm there is rain. I don’t normally mind much at all. I'm built for my climate it seems. I am one of those ‘warm people’. You know, the kind whose handshake on a cold day is invariably remarked on for its temperature. Yeh that’s me.

This day though, the wind chill cut me right through and my ambient heat was stolen away by this blustery gusting. The car had been warm, heaters set to maximum thurst, forcefully driving engine heated air across my toes and up, but that pleasant memory was left with the vehicle parked as it was a few feet away.

I gazed longingly at it, wondering if I could nip back there and wait until my companion arrived, when I heard a heavy foot step and a shuddering exhalation behind me.

I turned to see a broad figure standing just beside me, his shape made bulkier than usual by the addition of a long heavy overcoat, a thick wooly scarf, and a woolen beanie hat pulled low over his ears.

I have known Him quite some time now and feel like I’m getting the handle on some of the things, but his ability to turn up in that split second when your attention shifts still bothers me at times. I consider myself to be an attentive person, especially when standing outside or in a place I am not familiar with, both criteria being met today.

Yet still I had not seen him approach from either direction. It's almost as if he moved between the gaps in people's attention, and for a person of his size that seemed highly implausible. Still that is the best description I had for it and he never disagreed. At least he was remembering to make his last steps audible to me and give a little cough or something. Honestly, I can't count the number of times he made me near leap right out of my skin. We had to have a stern talk about this, and by a stern talk I mean that I gave out to him and he just smiled and laughed. Thankfully he isn't an asshole and took it on board. He still does it sometimes but I know it’s only in good humour and have learned to laugh along.

Of course all of this flashes through my brain at the speed of thought so that he is not left wanting of an acknowledgement.

“Its fierce alright. Can’t say I’m too chuffed with the location D. Why are we out here anyway?”

I glanced passed him to where the sea thundered into the shore, shattering itself in breaking waves of froth against the strand, the grey swell of it mimicking the heavy blanket of cloud overhead.

“It’s spring now that Imbolc has been and gone. It’s time to shake of the grasp of winter’s chill and get out again. To be alive and active as the world returns from its little death.”

I watched as he rubbed his hands together and stamped his feet against the pervasive cold.

“I’m shaking alright but it’s because of the winter chill. Maybe we should call it off until the sun gets its ass in gear and turns up the heat?”

My glance strayed wistfully towards the car again.

“Ah come now! Once we get the legs going and the heart pumping you will warm up quick enough.”

With that he turned and set off in his rolling gait, part stroll part stride and awkward as all fuck to try match, but I hurried to keep pace as well as I could.

The walk along the strand took us clear of the car park pretty quick and it wasn’t long after that the signs of humanity were lost behind the rising dunes.

I enjoy the feeling of warm sand beneath my bare feet in the heat of summer, but trying to stride along on the soft shifting mess of it in the cold of winter is a hell all in itself. All the while the thunder of the surf and the incessant face freezing slap of the wind stole any opportunity for discussion.

This was the way of things. At times there was no need for talk be it a lecture or a joke or whatever. Sometimes it was just companionship. Simple as. Just sharing space with no need or requirements, work, or in today's case, words.

I’m not sure exactly when we turned about and began the return journey having kept my face down cast for much of the “stroll”, keeping it away from the worst of the wind. We climbed the steps up from the strand and were back once more at the car.

The shiver was deep inside me now, skin wet from surf spray carried inland on the wind. Its salty taste heavy on my lips. I worked hard to stop my teeth from chattering and looked over at my companion.

He wasn’t shivering or stamping his feet now, he was just looking at me appraisingly.

“Right, so maybe it’s still a little rough outside for the likes of yourself. It’s hard for me to tell you know?”

I felt my face contort in what I’m sure was a frown despite the numbness. The shiver had its icy touch upon me so my words came out all a stammer.

He had the good grace to look a little abashed at this, even shuffling his feet a little, though not with the cold I could see.

“The thing is, I learned this trick from the sun a long time ago and since then I have never really felt cold at all.”

He looked up and met my incredulous gaze, the shiver having taken up residence in my tongue and preventing any exclamation.

“It’s true. Thing is people are very sensitive at times and the mind is a fiend for short cutting to strange presumptions when presented with something even a little outside their regular expectation.”

He loosened the scarf and opened the buttons of his long coat down the front. Looking at this seemed to make me feel even colder.

“From your perspective it’s cold. That has certain meaning to you and your brain then fills in the expected indicators for reactions to cold. The shivering of the body, stamping of the feet, the rubbing of hands. Even the wearing of additional layers of clothes.”

At this the hat came off and was stashed in the deep pockets of the coat.

“A savvy person can read these expectations and use them to blend in when they would normally stand out, riding along these brain short cuts as it were. It takes a good bit of skill and attention to the details but it can really help when your trying to connect with someone, or avoid their attention even.”

Some deep controlled breathes had banished the shiver from my tongue.

“A good example is on a day like today. You won't remember how many people you saw with their hat and scarf on, but you will remember that one person wearing shorts and a t-shirt. Here mind this for me will you?”

At this he slipped his coat off and handed it to me, standing there in just a loose tshirt and a pair of garishly bright bermuda shorts.

Just looking at him made the shiver rise again, creeping gooseflesh all up my skin. The surprise of it contorted my face to incredulous again, as the words leapt from my lips.

“You have to teach me this trick!”

Dagda chuckled and turned to embrace the gusting blustery wind, arms spread wide so that it flapped against his clothes and hair. Already we were drawing furtive glances from the passers by.

“One day maybe. Now I’m off for a quick jog and to see how many people I can scandalise.”

He waved a big hand and turned away, trundling along into the wind, the sound of his laughing carrying clearly back to me.
Posted by An Scealai Beag at 2:36 pm