The World from a Snug 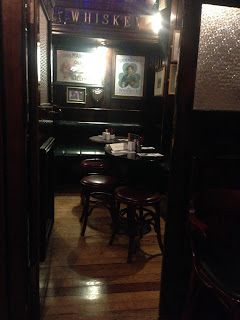 The loose leaves hustled in passed the doorman without showing their ID.
Gambolling about gaily on the gusts of an autumn wind, they set to a spin in the open area of the pub's entrance, a riot of orange and yellow.

I gave a nod to the guy standing wrapped up against the oncoming winter chill and followed the leaves in.

The pub was quite busy for the afternoon. Regulars propped up in spaces almost fit solely to them, families enjoying the social space and food menus, couples leaning in to one another ignoring the rest of the world about them.

At the bar I called for two pints and once in hand began moving through the people in the place, looking for the seat I knew would be reserved for me.

Stepping in and around any crowd you pass through a lot of conversations. I slipped in and around the people as I moved between the spaces in attention.

"Are they sure the numbers are right? I mean there was that thing a few years back..."

"That doesn't make sense though. Surely democracy is based on a majority ruling?...

"I just can believe it. Like, my brain can't process this..."

"I hope my family over there are doing ok. I'm sure there are a lot of people really upset right now..."

The emotions in the conversations were easily read for anyone to see. Uncertainty, Confusion, Incredulity, concern all there on the face or carried on the voice.

Under it all though was something deeper, something a lot more powerful and dangerous.

I came out of the crowd into the snug, that comfortable quiet space kept aside in some pubs.
The empty seat was set beside its twin, a slope backed little tub chair, designed for easy comfort.

I placed one pint on the dark wood table in front of the filled seat beside one which was near its empty, took a sip from mine, then spilling out of my over coat, settled into my chair.

The silence was the easy comfortable sort as I relaxed into the seat and he finished his pint. Placing the empty down his big hand closed around the fresh glass. Cold condensation running down the glass into the lines and over the work calluses, that hand raised the pint up to his bearded mouth for a first sip.

A sigh followed as the pint returned to the table.

"You arrived just in time, I have a thirst on me today."

I glanced at the six empty glasses already in situ.

"Well you know me. I'm like a wizard. Neither early nor late and arriving exactly when I mean to."

My smile matched his as our eyes meet for the first time in a few days. The deep brown of them showing the humour within, but to a familiar gaze such as mine, I noted a redness around that earthy colour. He looked tired and sore.

"Good story that. A long one for sure and leaning heavily upon tales of my people, but still, a good one.
The movies did it fair justice."

My concern did not shift but neither did my smile.

"We're drinking then? Am I on catch up?"

So saying I downed the two thirds which remained in one long pull and placed the empty on the table.

"Your round old man."

Dagda's smile was warm and eyes a sparkle as he waved to the server and called for more pints.

We sat in silent companionship sipping pints and watching the people as the existed within the space. It was busy in the pub.

His rumbling voice came out soft and sad, for my ears alone, and I understood the 'noise' he was referring to.

All people generate a certain amount of energy or presence and at times this can be coloured by their emotions and felt by anyone one with an awareness to it.

The 'noise' he mentioned was how we referred to a dissonance in someone's state of mind or emotion when they are in pain or fear of some sort. When gathered and shared the individual may ease their own burden but it's spread further to those who share in the moment, which of course can improve the situation or, should many already share a similar state, be made many times worse in a collective.

"Is that why we're drinking? You doing ok?"

His eyes rolled up to the nearby tv screen which showed a country divided red against blue, peoples split asunder by fear turned to hate.

"There's the cause. People the world over are uncertain of tomorrow, so they gather close with each other and try figure it out."

I glanced around the room and recalled the snippets of conversations I had over heard. I had to say it had triggered some questions and specific worries but less so for me given my own privileges than for friends and community.

"There will always be another Bres. Those who love of power, position or influence. They always  trumpet on about various policies or promises. Yet when it comes time to serving the needs of the entire community fairly and justly, you never see them with shovel in hand digging the drainage, or hands in the river scouring the pot."

I look down from the screen to see Dagda gazing at his callused worn hands. It looked to me that they had fresh marks and even small sections of torn skin recently scabbed over. Working hands. His knuckles popped as he made fists.

His eyes came up to meet mine and darkened to see the angry frown upon my features.

He exhaled slowly, unclenched his hands, and reached for his pint again.

"You can't fight hate with more hate. Aggression would only be read as a justification to those who have chosen to view their world from a position of divisiveness."

He took a long pull from the pint as I tried to wrangle with the problem.

"So I'm supposed to love those who hate me? Plead to their better nature or some such? That's very Christian alright, turn the other cheek so I can be slapped again and trust to hope that they will get bored of kicking me eventually?"

The words came out with an angry snarl. Dagda locked his earth brown eyes on mine and without a word I realised I had overstepped. The anger abated and I recognized my own fear, riding just below the surface of conscious thought. Still words said are hard to take back.

"We are a brutal species, driven by base instinct. We think we have come so very far and achieved so much, but given any excuse we would still cave each other's heads in with rocks."

The anger was replaced by a deep heart aching sadness which seemed my constant companion, and though my gaze fell to my pint, I still felt his eyes locked on me, seeing through me.

"I know you feel it Oakheart, it's what I have always felt since the start. Take it from me, don't let it harden you over much. We need to be tough enough to get on with the work despite the pain, but remain soft enough so that we can care enough for others. Not an easy challenge."

I raised my now wet eyes to his and saw there a deep compassion, not just for me but I knew for everyone of the people in the pub and even more then for those of this land and the others.

"You know my ways lad. When I'm moved to fight, I Kill. No quarter, no restraint. That is not what's needed here. I Know that much."

"Then how do we fight this? How do we raise the change that's needed?"

He glanced again at the tv screen, seeing the victory of fear over love.

My surprise must have been written plain on my face when he turned to look at me again.

"What? I'm known as the flame of all wisdom, not all knowledge. You of all should know the difference."

His single raised eyebrow on that stern broad face told me the joke for what it was and I could feel the smile stretch my cheeks.

"If you want to know about change then go talk to Her."

His eyes became distant for a moment as if he gazed out through the pubs walls and into a place I could not see.

"I dare say She saw this coming. Mayhaps that's why She has been recruiting all this time. Gathering the strong, the smart, the wilful to Her. Those who are brave and willing to Stand and be seen. To drive the change right there upon the very edge of the challenge. That is her Way."

His eyes came back to the room with a slight shake of his head, as if to clear it of distraction, and he lifted his glass for another drink.

He glanced at me, then rolled his gaze about the room, taking in the regulars, the families and the couples.

"Me? I do the work. I look out for what they need. Protect them, feed them.

Help them feel their sadness and cry, remind them of joy and song, and when all that is done, help them find a restful sleep.
Maybe if our community comes together, supported in these things, sharing in love and kindness, we can set a better example of acceptance for everyone.

Maybe that way love can defeat hate, community can overcome division, and the aching heart of our people can be healed."

He looked back to me, those deep brown eyes meeting my now tear filled ones, and I could feel the warmth of his hope  for the future.

His gaze fell to the near full pint in my hand, then across to the drained empty one in his.

When his gaze came back up it was all a mischief as usual.

"Drink up. Sure isn't it your round? I hope you were well paid recently for I have a thirst upon me."

The smirk on his broad warm face brought a bellow of laughter from me in an instant and I waved to the server for their attention.