The Magic of the Third String 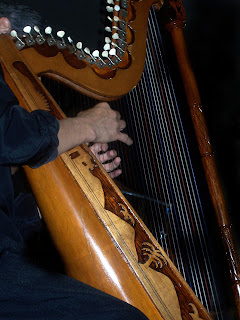 The gathering was a small intimate affair with no more than 10 guests mixing and chatting as they moved about the warm dry interior of the Rath.

The Dagda was tired of the big days and the big shows.

Sometimes the best thing a soul can do is choose the small things and enjoy them for their simplicity.

The atmosphere was relaxed, a few bottles of mead had been opened for the sipping and a small selection of cold meats, fresh bread, and cheese was laid out on the table.

The Dagda's chair was large and low. A comfortable sprawl of a thing, stuffed with goose down and covered with sheep skin, the wool kept clean and soft with regular replacement from his flocks .

It commanded a fine view of the space without dominating the area as a point of attention.

Literally, speaking it was the best seat in the house.

Hunkered down upon the earth, the Dagda's smile was broad and layered with many joys when he gazed upon it from across the room.

To see her scuffy feet curled about each other at the fine ankle, legs folded beneath her up on the chairs cushioned base.
Her back arched as she lent side ways, over her crossed arms, supporting her light weight on the chair's limb.
Her fine shoulders leading to a slim neck and on up to that face. He knew every curve, edge and angle of her face, even turned aside as she was, intent on her conversation.

The sight gave him quite the stir as he drank in her sharp beauty.
His match, his equal, his savior and destroyer.

His intent must have resonated too ardently as her eyes flickered to connect with his for but a moment, her smile widening a fraction before she returned to her talk with Brigit. The two had settled in early upon arrival and been deep in chat ever since.

A moment or two later the pair of them lit the room with a peal of laughter, not the first of the evening, and he much doubted it would be the last.

It always did his heart good to see his daughter at her ease, with her cares set aside for a time and her warm affection comforting and close.

Ha! You have lost my Chieftain. There is no victory for you here.

The Dagda's eyes returned to the ground in front of him where the bone pieces sat as they had been cast.

Lines darkened by ink slashed each carved bone. Some with small lines sprouting from a main line, some bisecting it.

Absent mindedly rubbing his scarred ear, the Dagda's eyes took in all the bones position and lines, and could see he had indeed lost this round.

With a good natured chuckle he collected the bones in his big hands.

I must say Ogma, all these lines are quite complex. Are you sure you have explained all the variations to me?

What needs explaining brother? The central line sets the length and shape of the word and the sprouts and bisects its letters.

He cast the bones for his last throw, knowing full well his brothers 'game' had been invented for the purpose of the Dagda loosing some of his flock.

With a smile he saw that indeed he had lost but he would not begrudge Ogma his victory.

Another round? I will stake my new sheep against some of your cattle?

The Dagda laughed heartily and held up his hands.

A good chieftain knows when to call his battle over.
Why not try your hand against the skillful one and see how you fair.

Following the direction of the nod and with the light of mischief in his eyes Ogma crossed the space to educate Lugh on the rules of the game.

He'll not have as easy a time of it with quick fingers over there.

The voice was deep and gravelly, the throat that created it having been scarred by smoke and fire.

Aye Goibhniú, you're not wrong there. I have no doubt Lugh will have the léine off him, unless Ogma can keep his head sharp and eyes open.

Tis a nice gathering you have here. Still wish you could have let me being the feast. I have such treats as to leave an ache for the taste of them.

The Dagda smiled to recall the feasts of  Goibhniú and the many days of aching taste and sensation.

Thank you but no. These revels are for quieter folk.
I'm really glad you could make it. Can you abide a while longer my friend? How fair the forge fires? Will they not dwindle without you're care?

The fires will hold awhile yet as they are well feasted upon my wood store.
Besides, your companionship I could take or leave but your fresh bread should never be missed.

With a salute of his mead cup the smith moved over to the table, tore a large chunk from a fresh loaf and, slathering it in butter, began to tear into it heartily.

The Dagda sat a moment with a content smile on his face.
Eyes drifting closed for he allowed all the sounds of his home wash over him.

This was a simple joy. Good food and good company. The best of things to heal a heart.

Opening his eyes, he reached up to take down his harp.

With a fond caress of its wooden sound-box and intricate frame, he moved his thick fingers to the strings.

In no more than a touch they were all a hum with a soft sound set to dance about the space.

Light tones, split and merged in intricate harmony as the Dagda closed his eyes again and allowed the music into his heart.

His fingers danced and strummed as the tune flowed down deeper into him. Touching his joy it seemed to sparkle in that space behind his eyes. The melody swirling and twirling a mesmerizing sensation of elation within him.

Deeper and deeper the music flowed, and his fingers allowed the emotions out.

Subtly at first, but then markedly so. The notes became longer, the tempo slower, the longer strings giving a more somber bend to the tune.

The music reached the vault where in the Dagda carries the woes of the world.

The pain of the peoples for their loss of loved ones.

The impotent frustration at the injustices committed upon them by those who should be their neighbor.

The grief gathered upon the collective shoulders of all who have known violence and abuse.

An old warriors sufferance receiving the scorn of the young.

The traveler from afar distrusted due to their difference.

The disregard and dismissal of a talent just because of the sex of the one possessing it.

The tune spun about these woes and shed them, up and out through those thick fingers, freeing them in the vibration of string and the resonance of a wooden box.

The Dagda sat, eyes closed and breathing slowly, packing away the vault once more. Settling his mind as the the untouched strings began to settle.
The last to cease its song was the third, and the Dagda open his eyes.

A fine pair of boots stood on the ground in front of him.

You move us all with that harp. Its range to bring joy and to bring sadness astound me every time. Truly its imbued with the Dagda's magic, and a powerful magic that is.

Looking up the Dagda met eyes of the Ildánách. Fine of form and fair of face he stood in his finery with eyes turned to red for the weeping and cheeks wet with his tears.

Heaving a hefty sigh the Dagda glanced down at the harp.

As he raised his eyes, once more they were alight with his usual sly mischief.

I guess that's what anyone would call a skill they had yet to comprehend.

The look of shock was stuck to Lugh's face as the Morrigan's amused snort changed the tears of one and all to laughter.