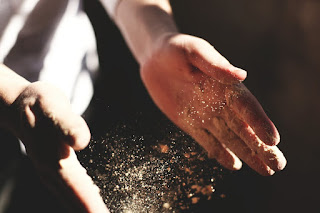 "Show me your hands lad."

Perplexed  I did as requested and held my hands up. I had come out of the house to  meet him at his arrival and as ever his ways are often a mystery to me,  that is until he explains them.

"Now turn them over, palms up."

His eyes gave the smile a mischief twist I was well familiar with these days.

That smile is his broadened a slight bit.

"I have told you already lad, what is magic if not a skill you just don't understand."

My smile answered and I gave a resigned shake of my head.
"Go on then."

Opening his big paw like hands he cupped both of my hands one in each and stared intently at my palms.

"So  what do you know of the art of palmistry? No no don't answer, I think I  can see it here. Yes skepticism but with a curiosity yes."

He  began to inspect my hands, tracing the lines of my palms and taking  hold of my fingers at various times all the while, hmming  and hawing to  himself.

"So, what do you see old man?"
Curiosity finally getting the better of me.

His eyes remained fixed to my skin.
"I  see, I see, strength and yet fragility. I see purpose and yet pain. I  see affection and endurance. I see hands of a music maker, hands of  builder, hands of hospitality."

He stepped back and gazed at me with those deep eyes of his as a knowing smile crept its way into his face.
I gazed at my hands and wondered, recalling all I know of palmistry from the sources I had encountered.

"All that?"
My moment of contemplation was shattered to hear his guffaw of laughter followed by a deep rumbling chuckle.

"What? What's funny?"
His chuckle passed and with a deep breath he looked to me.

"You are, the look on your face."
My frown came down heavy and annoyed.

"Alright then, what's the trick?"
His eyes sparkled and his voice took on that tone of the knowledgeable teacher.

"As with any magic trick, the key is in the misdirection. What do you know of palmistry?"
As I began to marshal my thoughts to prepare an answer he interrupted and carried.

"It doesn't matter. That's the misdirection!"

"But how did you know the things you did then? I haven't touched that saxophone in years!"

"Alright lad, here is the key to the true skill of it."
As  usual, he paused, big smile on his broad features, allowing his  audience to await the big reveal like the very best of show men.

"You what? You're telling my you just looked and my hands?"
"No. Looking is just a passive state of awareness. What I did was observation or detailed active awareness.

Let's break it down shall we?

Strength  and fragility was first. Feeling your hands and fingers showed me the  strength there, but observing your nails, bitten not clipped told me  you're nervous and biting them, so a certain about of anxiousness or  fragility in a sense.

Purpose and yet pain. Well look at your hands and the slices healing on your skin.
You  have been working at some maintenance job or other. The multiple  directions of the cuts and locations around your index finger and thumb  showed that it was twisting for turning something, loosening a valve or a  bolt, one with sharp edges. The depth of them and the colour of the  healing skin shows that you bled but the repeated cross cuts showed that  you didn't stop and carried on. Purpose despite the pain.

Affection  and endurance is easy. The cats are quite playful and you enjoy their  company, but they do bite and scrape a lot and you seem to endure the  marks to your skin for the sake of the affection given with it."

"Ok  I get it. So it's paying attention to the details, but that's still  doesn't explain the rest. How can anything you would see tell you about  music? That saxophone hasn't been out of its case in years."

His  eyes took on a gleam of the mentor finding the gap in their pupils  thought process and savouring the moment prior to revelation.

"You're forgetting that observation is not solely a function of the eye.
You're  hands smell very faintly of oil used to lubricate the functions on musical  instruments."

I looked at him in blank amazement at his explanation.

"The nose knows" said Dagda as he tapped the side of his nostril with a large callused finger, and gave a conspiratorial wink.

"Hold on....you missed one. What about hospitality?"

His smile broadened again to show teeth this time and I knew at that moment I had fallen into his trap.

"Well you're going to invite me in to your new home and make me a sandwich aren't you?"