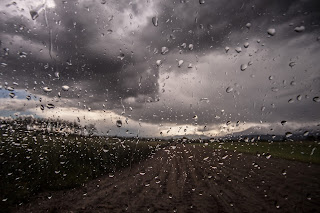 The rain fell in sheets as was its manner in the green isle.
The heavy clouds pressing themselves close to the land, speeding the waters' fall to the earth with their nearness.

The storm had rolled in during the night and commenced its deluge.

It was a day for big coats, warm hats or hoods, and a sturdy umbrella.

He enjoyed the rain.

As he donned his heavy long coat and turned the collar up around his thick neck he smiled ,remembering a line from a movie.  The character's mother had told her that “god was in the rain”.

This idea always tickled him, because on one level the mother was correct in that some people view the elements as a source of worship, but the smile always got that little bit wider when he stepped outside and felt the first drops hit his face.

Opening the broad golf umbrella, he set off down the road in his usual rolling gait, his trim frame leaning slightly forward into the rain. He’d had no need for big work of late, so a big appetite and big shape was not required.

The smile slipped to a thoughtful frown as he passed the election posters. Politicians. The elected leaders set to govern in the interests of the people.

That same movie provided a new line from his memory, one which he could not help but feel saddened by : "People should not fear their government, governments should fear their people."

These elected officials seem most concerned with their status and personal benefits, with their back talk and 'policy' discussion.

Where was the leadership?  Where the sacrifice to do what was best for the people?

The People, so caring and understanding and welcoming as a nation, but are they too understanding? Where is the anger and fight?

He has seen a lot of change in his time upon this island, and looked forward to a lot more.

His eyes moved back to the water falling abundantly from the sky. Water, given freely by the process of the world’s cycles.

They expected the people to pay for that which falls freely from the sky? Sure, there are processes that are important to manage disease and health to make it consumable for people these days.

All of that science must have worked, as humans these days lived a lot longer, or should he say, their life extended a lot longer than some he could recall.

The sadness began to settle upon him; so many gone who never had as many years as people these days. So many, who sang and fought ,who loved and lost.

So many whose greatness echoed even onto this very day.

They may have had shorter lives back then, but they definitely lived them to the full.

In an effort to wash away the sadness, he stopped in the street, and moving the umbrella aside he tilted his head back and set his face to the rain’s fall.

The water was cold as it splashed on his skin. In seconds the rain had soaked his broad features and was running in little rivulets through the care worn lines of his forehead, and those around his eyes.

If there had been tears shed then they would fall with the rest of the water to wet the earth.

Heaving a sigh he shook himself, and caused a cascade of water to shift off of him and hammer into the ground.

Looking down he saw the waters flow to the side of the concrete pathway and into the drains and away.

His face softened and a small smile returned as the umbrella once again covered him from the falling water.
There will always be change, it cannot be stopped.

Like the waters which flow it will always find a way. There will be those that try fighting it but eventually they will be worn down or worked around.

Change is a power that all people possess. From the small to the large, the change starts with each person, and it starts with a choice.

He recalled the news of communities coming together. Neighbour standing with neighbour in peaceful opposition to the government forcing its agenda against the will of the people.

His smile became that bit bigger as he considered the wider world impact his little island had when its people raised their voice and collectively declared that the union of two people, one to the other, should not be restricted based on their gender.

Change, a power every person possesses, and it starts with a choice.

Putting one foot in front of the other, he moved on through the grey wet gloom until he reached his destination.

The pub was warm and dry, a fire crackled merrily over in the hearth. A few patrons sat about the space chatting and enjoying companionship.

Tapping off his umbrella he placed in the stand. Shirking off his big coat he hung it by the door and strolled up to his stool at the bar.

Shaking out his paper he let his mind drift as his eyes moved, waiting for the barman to finish serving the woman down the way.

“Pint of the usual, please Derek. Got any tips on the horses today?”

“No way D. I lost more than enough on that last run yesterday. I wouldn’t want to give you my bad luck.”

As the barman moved away to pull the pint, the woman he had just served slipped in to the seat beside him.

“Warmaiden in the fourth might suit. I hear she is feisty and likes to bite, but they say she is one amazing ride, if you like to gamble.”

His eyes left the paper and roamed up her small frame to a face of fine sharp features and smiling pink lips.

It was always her eyes though. Every time, they seemed to stop his heart and steal his breath. Those eyes roamed about his shape in return, from his broad shoulders to his slim waist.

The Dagda’s eyes took on a mischievous twinkle as his dimples came out to match his broad smile.

https://www.patreon.com/Dagda
Posted by An Scealai Beag at 2:09 pm No comments: