For Lands lost and Gained 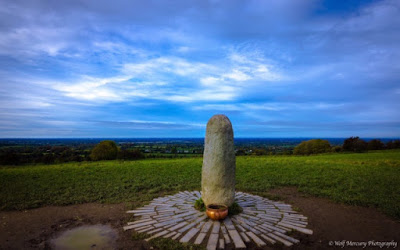 
Orange and yellow flames licking and dancing all about, consuming the ships that had brought them safely to this Place.


Hard it had been to bring fire to bite, in this wet land with cloud close down and rain falling.


The seers had spoken true and now the Dagda stood upon new ground with all of the work ahead of him and the Tuatha de Dannan standing behind.


He had felt the heavy frightened gaze of the People upon him as he struck again and again with his tools and hands to bring the spark to flame and the flame to take hold.


His eyes left the flames to their dancing to roam those gathered all about, the hardy, the wilful, the survivors. Gathered together from the ships, brought from the four great cities, these people became as one.


Again his eye was distracted for a moment by the shadow. It had come from one of the other ships, from one of the other cities, and fluttered here and about like a crow above battle field. None saw it or if they did, none reacted to it, and so neither did he, though careful watch he kept of it. Keenly he felt it's Will and it's curiosity, not least of all when it's attention fell upon himself.


Still, there was work to be done as he came full about to regard  Nuada where he stood before the folk, tall and strong and perfect of form.


Thinking on that he looked down at himself, broad and craggy, heavyset and weather beaten, scarred and stained from the work. Finally his eyes came down beyond his girth and found the cauldron set upon the ground at his feet.


Vast and round, its metal gleaming, yet scoured, scraped and  fire scorched from use, it was indeed a mighty vessel. Not pretty, but practical. They made a fine pair so it would seem.


He remembered the day before the departing, chieftains of the people summoned to the seat of the Four who Saw.


He had stood to the back of that gathering, his clann was small and though he had right to be here he knew many of the others by reputation and made way for them, fair Lardanel, Nuada, Morfis, Beothach and many more besides.


A hush had fallen upon these chieftains, these leaders of the people, as they waited the correct moment.


It had arrived soon after and into that silence came the Four.


As one they spoke of the journey to come, the lands that the people would find and some of the trials that must be overcome.


"Destiny calls and Destiny is where you are bound." said Fessus.
"The land is to be carved as four provinces" said Esrus.
"Everyone shall stand as One with honour to defend their home" said Uscais
"All who reside therein shall abide by hospitality's law" said Semais


"To see this done, these items will you take to the new land." said the Four.


With that they produced four great treasures, one from each city.


He had watched in curious wonder as the Four began to move about the gathering, each bearing the treasure and seeking the hand that would carry it.


His eyes moved to the commotion to one side as the Sword was presented by Esrus then seconds later to the other side, as the Spear left Uscias's hand.


Straightening up from his habitual slouch he had tried to see whom now held these wondrous and dangerous items.


He was interrupted a moment later by a polite cough and looked down into a pair of smiling grey eyes.
I'm his haste to see, he must have stepped in the way and so thinking he apologised hurriedly and stepped back from Semias.


The Seer was small and slight but easily held a vast round cooking cauldron in their arms.
For each step back though, Semias took one towards him, until his back was to the wall and the Cauldron held before him.


"Welcome chieftain, may I present to you the Cauldron of the Dagda."


It was, as his mind raced in that moment that he had first seen the shadow, and felt it's curiosity fall upon him. What are you? it seemed to whisper in the recesses of his mind.


"I am but leader of a small family community near Murias. I am no champion of great deed,  nor hero of great renown. I am not one worthy to be the Dagda. I wouldn't even know how. Surely you must look elsewhere."


Semias' smile broadened taking in their entire face this time.


Semias placed the cauldron down at his feet, and raising their voice spoke so all could hear, turning slow about in place so all would have recognition.


Coming back about their eyes met once more, no one but he saw the wink nor heard the whisper.


All eyes had fallen on him and in that moment he made the choice.


Crouching down he gathered the mighty vessel into his arms and with a heave he straightened his legs and stood.


"I am The Dagda.
I accept this vessel as my own and of me. Let any who come seeking be made welcome, let any who go hungry be filled, let any who require rest find safety in my care.
I bind myself to this path by my Word and by my Will, now and forever.
I am The Dagda."


As the cheer rose up all about, he felt again that shadow presence near about him, close this time, that cold curiosity chilling his warm skin. What are you?


In his distraction, he felt the weight of the cauldron shift, seeming to increase, and adjusted his grip. Turning about he saw no one close to him. The gathering made space for the Dagda, and he strode forward to join the two chieftains bearing the sword and spear.


The gathering looked to Fessus and saw that their hands were empty,  no sign of the stone and no fourth Chieftain stepped forward.


"There must be a King!" a voice shouted.
"Yeh, who will rule?" Another cried.
"Bring forth the stone, make it choose!" Yelled a third.


Soon the hall was all a clamour with raised voices, claiming and decrying each other's right to rule.


Fessus stood with the Four and said no word.


The noise began to grow too much for the Dagda and just as he thought to leave them to their bickering, the cauldron seemed to shift of its own accord as if something heavy moved within it.


Thinking fast he knew what he had to do.


With a big callused hand he struck the side of the cauldron and caused an echoing note to reverberate around the space.


For the second time silence fell and all eyes came drawn to him.


"What kind of ruler would you crown without a land to acknowledge them?"


The Dagda set his stern gaze upon the room and gave Will to his words.


"Three there are and three shall lead. What decisions need made shall be by majority of three, and when we set foot upon this Land it shall be with her consent and her choice that one shall rule.


Let the stone remain as is and travel with us by the Will of the Four who have gifted it. Upon the land alone can it name a King.


With his last words he looked to his fellow champions, Nuada, and Lugh known as 'Long Arm'.


Each took a moment of thought and with a glance to the other gave their assent.


Lugh raised his voice and in sweet tones he said


"Our Dagda speaks fair and with just purpose. Let each who will travel prepare and hone their skills for taming a new land will not be easy".


Nuada nodded and spoke then.


"Conflict and challenge has always been our way, but as four cities we have come together to safeguard our future. From this moment on let us unite and be as One people. The Tuatha De Dannan!"


The cheers of this moment brought him back from the cheers of memory. Nuada stood again before the people, tall and strong, perfect of form, an aspiration to follow. No doubt some inspiring words or easy comradeship had brought the People to roar their approval of him.


Heaving out his breath, the Dagda crouched and wrapped his muck and soot scorched hands about the Cauldron.
Heaving upright, again he felt that subtle shift of the item hidden deep within it.


Setting his legs under him he struck out alone, off across this new land on paths that as yet did not exist. There was a place he had to find. A place for Kings. A place for the People. A place where it can all be brought together as One.


He had a date with Destiny, and didn't want to be late.