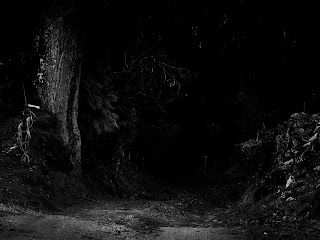 It was always a tricky time for his peoples, for when darkness is late to leave and early to return, what work can be done in between?

The land was cold to her core and with no light and warmth, nothing  would grow.

Still once the winter solstice passes the land would warm anew and the cycle begin again. This he knew for he had carried the knowledge to this land upon the ships of old.

He sat in a grand hall, warmed by fire well fed from a dry store, the scent of wood smoke mingled with that of the many bodies of those who shared in the warmth and light.

Meals were made upon those fires and all had a share given them, for all were part of the people and all had offered some labour of one sort or another through out the year.

After the cold would come the thaw. As the rains wet the earth, the toil of the body would begin. Fixing that which the cold had damaged and preparing the land for the time of growth.

Growth would see the work maintained, as the light and heat turned seed to grain, flocks and herds to full. This time, the warmth of the world filling all with heat, would see the most challenge of raid and conflict as that heat would raise the blood of the warriors.

Next would be harvest. The gathering in and storing of all the other seasons labours. Reaping the rewards for the effort, and taking, at last, a rest for the body's toil.

Once again, as it was now, the time of darkness would return. With no light to see and no warmth to the land, the toil of the body is not needed. What then can a person set their will to?

All of the peoples gather close and hold tight to their meals and memories of the harvest warmth and plenty. Warriors blood cools and the rule of darkness extends.

Outside the hall, a wolf did howl, a crow did cry, an owl did screech. All noises made by the creatures of the night.

Outside in the darkness She held sway, bringing to the people fit reminder of fear, recalling to them that all days end in darkness, all lives lead to the black.

She held sway in the darkness.

He, held balance in the light.

What toil indeed can a person set their Will to?

The toil of the Self.

When the world brings us to a state of in action, When we reach a place where there is no immediate next step, the all of Life's routine comes to a halt, there, in that space are we given time to toil on that which is Ourself.

He looked about the grand hall with its fires and its people, and raising his Harp he began to play, plucking at the strings of heart and memory, strong sure fingers leading the melody of emotion.

In the stillness, surrounded by the dark, feeling the fear, huddled to the fire, the people looked inwards.

With no toil of labour to distract them, with no hot blooded raid to take them, each had to face their true challenge, the honest gaze of the self in the silence of their own heart and mind.

The melody moved about the hall, drowning out the calls of the darkness and the night outside, his eyes roamed about touching upon each as they saw the truth of themselves.

Private and intimate none but each of them could know it's depth. He saw some faces wet with tears, some hang with shame, yet all did, in time, grow firm with acceptance as the music moved about.

When the toil of Knowing yourself was done, when all had made peace with their darkness within and balanced it against the darkness without, when the last of the work was done, his fingers stopped, the strings of his harp hung their vibrating tone in the moment, allowing the space, giving the pause it's own short life.

A smile arose on the Dagda's face as the eyes of one and all eventually found him.

"Enough of that now, how about a tune to raise the spirit?

His thick fingers moved at pace along the strings and skipping the third he did set the hearts a beating and the smiles a gleaming.

"And speaking of spirits, someone pass me a drink!"