To walk the Mountain Tops 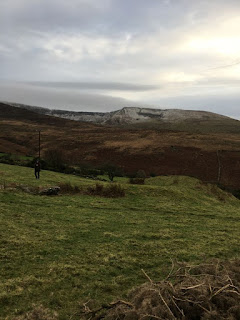 The mountain air was cold as it passed my lips, sending it searing chill deep into my lungs.

I exhale faster than my natural rhythm just to get the air out of me before the cold can catch to my lungs and freeze me.

The views around the area are grand and sweeping, all rolling glacially crafted curves covered in years of rich brown soil upon which the green of the island’s grass is grown.

My eyes do not see them as they fall to the hard frozen ground in front of me. My heavy feet move forward one step at a time as I watch for the next rock or dip upon which I might stumble.

So it was that the upright stone crept up and surprised me. It’s looming rock form manifesting out of the ground in front of me, splitting the trail I had been following with its erect solidity. It’s grey sloped sides carved flat so it’s squared form rose to the height of me. The markings scored on its corners took my attention and not for the first time regret arose for not knowing the ways of ogham.

With my journey stopped by this odd pillar I finally looked up from my feet at the land all about me. Cold and cloud heavy for the season of it, there was still great beauty in the roll of the mountains, the green brown patchwork of fields and the gorse.

Again it was the unexpected that drew my attention. The broad figure labouring two fields away, digging and hauling, arms bare in just a loose t-shirt despite the December chill upon the heights.

Turning my back to the pillar stone I made my way across the fields, navigating the walls, hedges and watchful gazes of sheep.

The closer I got the more sure I became about the identity of the labourer until I stood just behind and to the right of Him. Close enough to see the breath clouding the air about and smell the sweat adorning him.

I waited. It’s never good to sneak up on someone like him despite his playful friendly demeanour, then again I’m not sure sneaking up on hims is really possible. A thought which seemed to be answered almost as soon as it occurred.

“Pass me that rock there will you?”

The thick fingered hand was dirt covered when it gestures out to the rock in question. Knowing him as I do and my own nature, there was only correct action.

My fingers were cold to the point of near numbness but the scrape of the rocks craggy surface and the weight of its bulk as I stood to raise it, was still enough to draw a growl of effort from me.

A few steps over and I was placing the stone amongst some others in a pit he had dug in the field.

So it was that I spent the next time, shifting soil and hefting rocks until the cold was banished from me, the sweat slick upon me and my arms too, bared in but a t-shirt upon a December mountain top.

When he stepped back I stood to see what it was our labour had produced. A circular stone ringed fire pit set next to a long stone lined trough, surrounded by the banked up earth from the pit.

He passed me a bottle of water and I sipped of it slowly, rehydrating my body as the sweat steam rose from my shoulders.

“Light a fire whilst I fetch the waters.”

I stride about the edges and hedges of the field gathering what fuels I could and returned to set them in the fire pit and begin the work of calling fire. Setting the kindling and tinder then applying spark and breath to feed its growth.

All the time my companion trudged across the field to the spring and back hauling water and splashing it into the trough.

The blaze was crackling merrily heating the area around us, protected from the wind by the banked earth, by the time the trough was full and my companion finally stopped to sit with me at the hearth.

I had remembered ancient stories about these sites dotted around the island. It seemed that they were for boiling meat in a trough of water heated by rocks from a fire.

It seemed like a lot of effort to go through for just a spot to cook, especially if the peoples were so nomadic at the time.

It shouldn’t really surprise me when he answers my thoughts, but it still does and I wonder what gives me away every time.

“It is a lot of effort to build the likes of this, but not so much when you consider that it’s more than just a cook pot. How did you find your way here?”

“I was trudging across the mountains when I came to that pillar stone across the way. From there I saw yourself at work down here. What’s with the pillar and the markings on it? Why is it there?”

“It’s there to do exactly as it did, point those walking the hills to this place. Quite cold up here isn’t it? That is when you don’t have the labours warmth upon you.”

The mention of the cold brought the chill thoughts back and despite the warmth of the fire in front of me I couldn’t suppress a shiver. I glanced up to see his gaze turned out beyond the fires light. Taking in the land and as the clouds began to darken towards night.

“There were a lot of the peoples up in these hills back then. Peoples moving around above the dark wet swamps of glacier melt in the lowlands, but beneath the cold open peaks where a body could still freeze in the nights chill.”

His voice was almost as distant as his eyes as he looked into a time long before today.

“Fulacht fiadh was more than just a cooking spot, more than just a temporary campsite. It was the beginnings of community. It was a place to which any could come, everyone was welcome, food prepared and the care of those struck by the cold could be cured.”

His eyes came back to mine as we gazed across the fire.

“Do you know you can die from hypothermia? Do you know that unless you can raise the person's body temperature enough they may go mad, strip off their clothes and then have their heart stop?”

I knew some things from my days in the scouts but never that it could go that far. His eyes told me truth as ever, and the sadness there told me that those eyes had seen it first hand.

“Sitting by a fire will do some good but it takes a long time for the heat to reach one's heart. Placed in a trough where fire burnt rocks heat the water a person can soon be warmed through.”

His eyes fell to the fire where it danced and crackled its usual hearth song and I saw a sad smile creep on to his face. I kept to my silence and left him to his for a time as the fire danced between us.

"The people need those of us who can to do the works so that lives may not be lost to circumstance."

As ever there is more to any one thing than the histories can tell us and what knowledge is lost when the labours cease and the conversations quiet?

Eventually the Dagda’s head came up and his smile broadened and his big hand came to rest on my shoulder whilst I had kept to my silence and just smiled at him.

“Thanks for helping me do the work.”

***For early Access to more stories, recording and other features please connect with me on Patreon
Patreon Dagda Bard