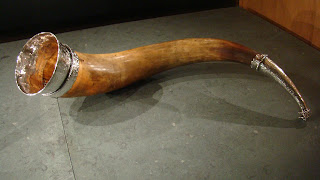 A long enough period to strain the stamina of many.

Muscles all a fire and heads all a spin, this was no place for the faint of heart, or weak if constitution.


The music kept its frantic pace as the dancers reeled and sprang about to its beats and rests.

He had to give it to those godsmen for one thing at least, they made a fine beverage.

Lacking the spirit of the more traditional alcohols, these frothy brews allowed for a large quantity of consumption.

The flavors set to tickle even the most refined pallet, though in saying that there were many who never thought of him as refined in any context.

The conceit tickled him and a burbling chuckle became a full throated bellow of laughter.

Then again, with many an empty cask strewn about him he couldn't say they presumed overly much.

His humorous outburst returned to a pleasurable warmth in his mind, but something was different.

With a sharpening of senses, though no outward sign of wariness, he moved his eyes across the hall.

The main floor space was taken up by the dancers.
30 strong, lithe forms flowing like water in the river of the music. Stamping feet and twirling bodies mingled and dispersed only to mingle again.
Smiling faces and clasping hands moving the revelers to the tunes of songs long held dear for this joy they brought.

The 15 bards set the flow with pipe, horn, bodhrán and his preference, harp.
The magic they wove spilling a joy of motion across the space. Tempo, pitch, cadence, melody, harmony. These were the tools of this most powerful craft.
The notes weaving amidst one another, merging and yet distinct to the ear that could hear them.
Emotion embodied in sound.

Opposite the bards, thankfully, the drinks were flowing without end and the foods bringing delight and sustenance to one and all.
Roasted meat by the platter, fruits and cheeses, warm fresh breads, and pies of many sweet or savoury fillings. A heady aroma filled the air, fit to bring any mouth to moistness in anticipation of fantastic flavor.

As his eyes rolled back towards to dance they caught what his senses had told him was there.

A shadow among the shadows. A darkness in between the lights.
Some feat indeed given the multitude of torches and candles that lit the space.

Downing his drink he drew himself another, feigning ignorance as the shadow moved about.

It flitted and floated, passing between the gaps in attention.

This was what he had been looking for, and his smile grew broad upon his flushed face.

As it ghosted past him, nought but a blur in the peripherals of his vision, nothing more that a wisp of a shade, his hand shot out like a lightning bolt, grasping a well muscled arm and spinning the owner into his broad lap.

A surprised indignant yelp was his reward, that and a resounding teeth-rattling slap across his jaw.

In an instant the space stopped. A cold steely Will wrapping the second in ice and freezing it solid.

She was all a fury to have been so interrupted.

Her hair spilled about her shoulders in a cascade, her gown of finest fabric fitting tight to her warrior's form, a shape that did not go unnoticed to his appreciative gaze.

His eyes roamed slowly back up to her face, severe and beautiful; high cheek bones and sharp jawline in complete complement to her lithe shape.

His eyes met hers. Warm earthy brown gazed into eyes as grey as a storm cloud.
Thunder would not be long away, he thought.

That thought spread the smile on his face a good bit broader, which made puckering his lips for a kiss all the harder.

In the literal blink of an eye the storm clouds passed and an azure blue of a fresh spring sky took its place.

Sharp nails raked his arm as her face moved towards his, her breath coming hot against his skin.

At the last moment she dipped past his face and sunk her teeth into his neck.
The bite was hard yet she did not break skin.

Her lips sealed around the bite to suck against his flesh as a small gasp escaped him.

Mind your appetites my love. Remember we are not at the ford.

A chuckle rolled out of his chest as the next second finally arrived and the Morrigan was gone from sight.

With a wince at the mark on his neck, the Dagda refilled his cup anew and settled back to enjoy the revels.