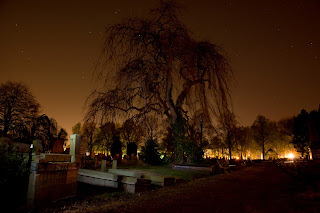 The throaty rumble of the engine came to a stop as the hearse rolled slowly to its position.

Silence returned to the garden, disturbed only by the wind in the few trees and the soft shuffle step of the mourners.


The box was slowly taken from the vehicle, heavy with a saddening emptiness, born aloft by the kin of the deceased within.

The procession moved off behind the symbol of their sacrificed saviour, lead by a Godsman reciting   words of their ritual of internment.

Passing the oak tree, no eyes acknowledged the two figures standing beneath its boughs.

One tall and fair, with bright beautiful features and fine raiment of an age not fitting the time.
The other, shorter but a half again as broad of shoulder than the first, hunkered down in a squat with wide back resting again the tree, a dirty léine covering his muscled form.

Why for do you come to these gardens time and again?

Lugh's voice had a musical lilt that almost hid the scorn.

They don't even know your name anymore, let alone say it out loud.
At least a few tales of me remain and many are the skills that bear a calling back to me.

The other figure did not move or turn at Lugh's comment.

His eyes fixed on the mourners as the last of them, a small boy, shuffled past. The boy seemed lost in thought, adrift in the ritual of the old.

The Godsman finished the words of ritual and sealed the ceremony with fire and water.

The box was lowered down, passing into the earth to renew the soil and return the clay to the land that had sustained it in life.

The mourners began to drift away as the silence of the garden reasserted itself.

With a grunt the broad figure rose and with a rap of his knuckles on the oak, opened the door.

As they passed through the Dagda looked back one last time at the small figure by the fresh turned earth.

Just because they do not believe in me, does not mean I should give up my belief in them.

As the door closed the boy at last began to relax.

The strangely dressed men had worried him, though like many things of this sort he couldn't tell the adults.

At least the dirty one had looked friendly.

I wonder what his name is, thought the boy, as he said a farewell to his grandad.