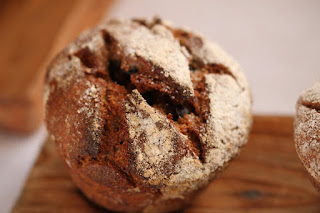 His shoulder flexed as his arm came down and around, again and again, moving with a well practiced fluidity.

Smoke filled the space and sweat adorned his brow as his muscles flexed to his task.

A deep basso rumble was just audible above the squelch and slosh as his left arm withdrew the stirring spoon from the mix, and the right raised the jug to pour more water among the flour and egg mixture. As the left returned to its mixing the right regularly rotated the bowl.

If anyone could see him at this moment they would see a sweat soaked brow with broad bluff features, his normally unruly hair pulled back, showing a face where lines of care chased lines of laughter across his skin.

This beard was tight cropped and circled a mouth that was currently smiling as the basso rumble of the tune hummed passed his lips.

The spoon was careful placed aside and the big hands moved into the bowl to rub and squeeze and knead the dough together, preparing it for the hot stone oven from where the wood smoke wafted its scent.

With practiced ease, he portioned the dough into loaves, moving and shifting their shape with his wide callused fingers and finally pulling a line across each centre with his little finger. The loaves found their place in the oven and he moved the cover over the front.

The smile departed and his eyes became distant, the rumbling hum dying on his lips, as his gaze fell into the flames. Warriors dashed and danced around one another, some rising up, others falling to ash as their form was forever dashed apart on blades of fire.

Time was up. They would be waiting.

Sluicing his hands in a water bucket, he wiped them on the front of his, until then, clean léine. Pulling the leather thong from its binding, his hair resorted to its unruly habits, made more so as his big fingers were drawn through it.

Appearances had to be maintained after all.

Applying his best smirk he picked up the handle of his club and, dragging its killing end in the dirt behind him, he went out to face his war host.

At least there will be fresh bread when this is all over, thought The Dagda, as the days battle began.