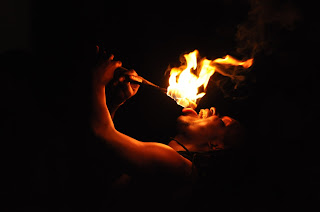 The sounds of battle had rocked the land for days and nights without end.

On the fourth day Creidhne took to task the finely crafted weapons to repair and replace so the folk could reap a toll of war.

On the fifth day Goibhniú unleashed his fires to burn the foe and set the land alight.

On the sixth day Brighid spoke before the assembled horde and called for an end to the fever fire, but her words fell on ears made deaf by hatred.

On the seventh day, She came.

Out of the darkness and across the lands through flame. She came.

War chariot thrumming as She drove it hard across the earth. She Came.

Braids of war set to writhe in the air about her head. Wreck and ruin her intent, laid bare in the brandished blades and shrieks for blood. She Came.

Followed by her war host, her Furies, her harpies, all eager to begin the slaughter.

Rocketing into camp She gathered the gaze of all who stood. The hurt and the tired.

Leaping to the ground She spun a dancers pirouette, Her blades coming unsheathed in her hands, bare feet resting but a moment in any one place. All eyes followed her. All attention hers by right, if not by adoration.

What host is this? What force of arms is held so in respite?
Tis but a short breath of life in any of you. A spark to keep for an age, or to build a blaze today and see it burn brightest, if for only the now.

Rise up!
Rise up and join my charge to deaths door and oblivion!

A ragged roar arose from the folk as they began to form groups and prepare for death.

One voice shattered the clamour to a silence that went beyond deafening.
One word thundered  across the war hosts' lines and broke all movement to a stand still.
One command and all was made to cease as if even time itself would not defy the Will behind its utterance.

Having not been seen, neither day nor night since the first blows were struck upon that first day.  He returned.
Moving with a killers steady grace, dragging his deaths head club across the battle churned earth.  He returned.
Flesh laid bare for all to see his hulking form, broad of shoulder and torso, legs defined by muscled shape, arms fit to break the worlds.
He returned.
Covered head to toe in the 'Dagda's Red', the foe blood, crimson gore, matting his hair and beard, layered across his scarred skin.
He returned.

All were stunned to see, and for many it was truly a new vision of horror forever to be recalled in their darkness hours.

She turned to him and in an instant their gazes locked. Her Will, likened to the lashing fury of the storms of ending, threw itself against his, yet found no weakness.

As her eyes narrowed, all her intent focused in a single moment.

Give me the order. Set me loose and I will bring you ruin.

The ruin you would bring this day would be to the very end of us all and that I will not abide.
Today is not the day of endings.

An accord has been struck and by my word, by my Will and by my club it will be upheld.

All who stood in attendance stayed within a frozen breath awaiting the outcome. The wrath of endings poised against the patience of beginnings.

The Dagda planted his club's killing end in the soil, which began to greedily drink the blood from its surface, as the Morrigan held his gaze.

With a slow silent bow of her head, the Morrigan withdrew. Her host returning across the land and back into the darkness.

As her chariot left sight the Dagda dropped to a knee, supported only by his club. In the passing of but a second, the stillness of the horde was released and his Warriors were around him encouraging him to rest.

With a sigh that blew away the battle field smoke, the Dagda hauled himself to his feet.

Take me to the wounded.
Work yet remains to be done.