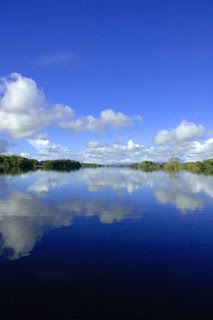 A long morning it had been. Warrior, hound and horse, were tired and a thirst was upon them as they approached the pool.

One of the younger warriors sighed to see the sight of the clear still waters.

"At last a drink to freshen my mouth. The thirst is upon me fierce."

"Whisht! You fool. Else it will be your life that is drank from you!"

The voice was stern and cracked the youths attention back just as he were about to touch the cool waters.

Old Aenagus glared at him, brows beetled and a look of both concern and disapproval on his features.

"Do you not know a spirit pool when you see one? Look at its surface again, a breeze here blows, but do you see a ripple?

A sup of that water would slake your thirst alright...but no other oisce after that would ever do so again."

Just as the youth staggered back in fright for the flat still lake, there came a mighty splash!

All the Warriors jumped and turned, some with weapons drawn.

Large ripples spread out, disrupting the water's surface, and as they stared in fear a figure arose from the water.

Not a one in the Warrior band, male or female failed to recognize the broad naked form of their Chieftain.

Rising up, waters streaming from his body and running in rivulets down his chest and arms, the Dagda cupped some of the cool water in his big hands and raised it to his lips.

His warrior band gasped in dismay but none would move against him.

With a mighty bellow he called.

" Come then Spirit, and see what you make of me!"

And so saying, the Dagda drank deep of the cupped water from his hands.

All sound fled the world and in an instant all was stopped.

The Warriors in the poolside, as if carved stone.

The ripples, where they had run across the pool, as if frozen atop the water.

The breeze where it had bent the grass and trees, held firm and still.

In the pool the Dagda lowered his hands from his face.

The spirit stood in the water not more than a few feet from him.

It's form, though made of the pools water, clear and see through, was female.

When the voice came to him, it rippled and giggled like a brook babbling across stones.

"Brave and foolish you are to drink the essence of me, for all peoples know that this water is sacred and to taste it is death."

So saying, the spirit began to drift closer, slowly moving through the water.

The creatures hunger and intent washed over the Dagda, yet he remained still.

"And what peoples will remain to honor you and these sacred waters if they die of thirst for lack of its taste?"

The Dagda's brow was set as he gathered his will to him.

The spirit did not reply and in but a moment she was upon him.

With the power of a wave it crashed against his broad flesh, yet the Dagda made no step backwards.

With the cold of the grave it wrapped itself about him, yet the Dagda made no move to pull away.

As its face moved close, lips hovering just a breath from his, it whispered.

"Fool you are to think you can thwart the elements. Now tasty my hunger and die."

So saying it placed its lips to his, wrapped its form tight about him, and began to feed.

Hunger like the depths of the darkest oceans crashed against the Dagda's Will, as the grave chill began to seep into him.

Down and deep the spirit fed it's hunger, taking the life force of its victim.

In response his heart began to hammer, rushing blood through his veins.

Then the Dagda moved.

Big broad arms rose from the water and wrapped about the spirits form.
The strength of the Chieftain began to crush the water spirit to his chest.
As his grip locked the creature, he released his Will, into it, and placed his thirst upon it.

For a moment the two locked in place, then with a huge and mighty gulp, the Dagda swallowed.

In an instant the spirits will shattered as the Dagda consumed part of its life force.
It began to thrash wildly against the strength that bound it, but found no give in the vice like grip.

Again the Dagda swallowed, and yet more of the creature was consumed by his thirst.

Breaking, its face away it screamed.

"What are you? What manner of monster? I will not suffer this!"

So saying the spirit began to thrash all the harder, but froze when his Will full voice fell upon it.

" I am The Dagda, chief of the Danu, son of the Mother, and you will suffer me."

With this words the Dagda locked his mouth to the spirit of water and setting his thirst upon it again began to gulp and gulp.

As the spirit diminished, it's struggles became weaker until all but the last mouthful remained, and there the Dagda stopped.

Holding the spirit in his hand, he loosened his grip slightly.

"I seek not your demise spirit, only your hospitality. From this day you will share the waters of this pool with the thirsty, and they in turn will honor you and the water you give with offerings.

So shall you be fed by this and no more take a life of the people.

This is the Will of the Dagda, and by it you will abide."

So saying the Dagda cast the spirit far out into the pool.

The rush of the wind returned, as it sank below the surface, and with the wind came the cries of his warriors.

The Dagda strode from the waters to his company, and saw their gawping faces,  none more so than old Aenagus.

" The water is now safe to drink, but each must sacrifice an offering to feed the spirit that residues there.

That is the agreement and set by my Will."

Each warrior took some treasured token to the water's edge, a broach, a coin, a torc, and casting it into the pool, took their fill of water.

"And how, pray tell, did you negotiate these terms, oh mighty Chieftain?"

Dagda turned to look into the sharp green eyes of Clara who addressed him, the followed her gaze down his own form to the firmness of his erection, where it stood proud and stiff,
throbbing to the rush of his blood.

Her bawdy laughter followed him as he turned hastily to grab up his clothes.