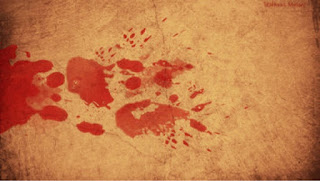 For respect. For pride. For love.

The next blow was a sweeping cross and though her feet carried her far, the weariness of the fight was taking it toll.

Catching her spinning form in the side it drove the wind from her and sent her tumbling to the ground with a sound that could only be ribs breaking.

With a warriors reflex she threw her weight with the impact and used its energy to roll herself clear of the follow up strike, which buried the weapon in the dirt.

'Will you not help her?'

The question came from a warrior somewhere beside him. Whom it was who questioned did not matter and he could not, would not remove his eyes from her.

Rolling up to a crouch, she spat her blood upon the soil, and smiled a fierce and wild smile at her foe.

The warrior paused, confusion on his face to see her so unbowed by the pain she no doubt felt.
Sweat streaked the fighters face and his breath came heavy to catch as he recovered his weapon.

In his hesitation she struck. A lunge and roll had her close, pain fueling her rage and setting speed to her strikes.

On the back foot her opponent retreated.

The Dagda's eyes never left the combat as his rumbling voice replied.

'She has chosen her fight and she is capable of seeing it through.

If this is the time of her death she will meet it gladly as a friend, unbroken by the world's tests. Resolute and dominant to her last breath.'

'Do you not care for her pain and hurt?'

Dagda's grip tightened to a white knuckled fist about the shaft of his deaths head club.

'Do not mistake my inaction for apathy. Should she fall this day then by my word, ruin will ride quick upon the heels of her last breath.

Until then, she has chosen this fight. Its challenge and consequence are hers alone.'

The warrior staggered backwards under the flurry of the blade dancer's assault, doing well to block many a killing stroke, yet taking many small injuries, set to sap his strength.

Dagda had seen her do this many times. Her skill turning the tide of any conflict, her stamina outlasting all but the must fit, her mind quicker than her blades.

Blowing out a big breath, the Chieftain relaxed his grip a little, as the Morrigan asserted her dominance over today's fight.

'She walks a warriors path, and I wait because I believe in her.'