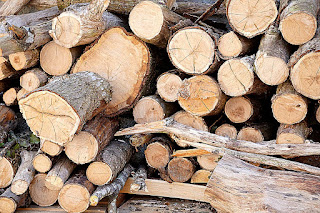 The Rath was filled with its usual comforting peace, the only sound in the space given by the hearths fire, where the wood was consumed with faint crackling noises.


The chieftain sat in his big seat, eyes lost to the dance and flicker of the flames, basking in their heat, grateful again for the warmth the wood gave.

He sat a long while, at his ease, turning something over and over in his big hands. It was a round of wood, looking to be cut from some tree, dried and smooth. His rough fingers traced the lines of the rings upon the trees heartwood. Solid and strong, the drying of the wood had not split nor cracked it.


With a last caress, he picked up the sharpened blade, and with a smile began to slowly whittle away peels from the wood. Allowing his mind to drift, he left it to his hands to free the shape within.


He remembered the day it had come to him. From the storm fallen bole of great tree which could no longer cling to life, he had found it. The tree he had taken to support the work of the smith, in his service to the peoples. The labour of cutting, carrying, sawing and stacking, his gift to his brother.

The island home was covered in trees, tall and green, strong and broad, old before a time his people's feet touched this soil. He had come to know and love them, these ancient creatures. Beings which merge all the elements into one form. Nourished by Earth fire and water, creating a form pulled from the Air itself, they stand bridging the Land and Sky, born of Water and the suns Fire.

He always seemed to breath more easily and deeply when surrounded by their bulk and beneath their leafy boughs. Many a deep restful sleep he had found seated amidst the large roots of some tree and grateful for their care he was.

Have you ever heard the trees sing? People always think its the wind that makes the trees rustle and hum their tunes, but He often wondered if it were not the trees rustle and song which made the wind. A gust here a breeze there, all to carrying their slow creaking groaning greetings one to the next.

Careful he was of these grand creatures, aware of their song, their vitality, and of the centuries they had stood witness to, he always took that which the tree had already given up, or the fallen form of one whose long watch had already ended.

So it had been with that giant oak, storm fallen and done. He made his peace with the heart of it and brought it forth to fuel the fires, yet as he had sawn the lumber, shearing the blade through the wood, the rasp and hiss of each cut, he had heard an echo of the heart song of it.

So it was, He had taken this one piece for himself.


The scrape of the whittling blade made a quiet complement to the fires crackle, as the curls of wood drifted down about his feet.


The tree’s heart. The core of it. Grown outward year after year. Strengthened and hardened layer after layer. He allowed himself to imagine the passage of those, years decades, centuries as the tree had held to the earth with its roots, branches raised high into the air.


Drawing in the water and nutrients from the earth. Absorbing the heat and energy of the suns fire. Exhaling its breath and sending its song along the wind.

Struggling from a small green fragile thing. Doing all it could day by day to grow and change. Taking on the elements and the wildlife of its environment as its grew.


Stretching and changing day after day by the smallest of measurements, by the barely perceptible increments, doing at least a little bit so that each effort builds upon the last. Until weeks, became months, became years, became decades, and every days effort became the next day's success.


Trees grow from the heart outwards.


The chieftain’s smile was a subtle thing, given as it was for himself and the fire alone.


One’s heart. No more crucial than many other parts of a body to make sure it functioned, but it always seems that there was more significance given to it than any other.


Follow your heart's desire. Listen to your hearts wants. Heed the hearts hammering.
Be brave and bold of heart. Keep an open heart.

No one ever said, listen to the wind of your lungs, or follow your kidneys.

He brushed some shavings from the top of his stomach where they had some to rest on his paunch. True they said trust your gut, but what was that when compared to the multitudes of sayings and meanings attributed to the heart.

He turned the wood over and began working to unlock the details of the piece. The shape was there now, almost distinguishable for its form.

Trees grow from the heart outwards.

He often wondered if people didn't do the same. True growth, real change growing from the core of each and everyone of us. From a place of happiness and comfort where ones heart is so full and fit to burst that the growth and change just spontaneously surges up? Or oft times from the pained and broken heart, where the growth and change must happen if one is to get to a place where the heart may heal.

Not to be handled lightly or given too freely for the hurt which can be done by them, but assuredly  not to be locked away from others or ourselves for how else will we find growth.

He looked down at the figure in his hands, rubbing his thick thumbs along its lines and form. It was a person. Blocky and broad, with a wide easy stance, arms bent and hands on its hips, the head tilted back as if the person were laughing joyfully. The Heart of the Oak.

Be brave and bold of heart.
Keep an open patient heart.
Stand strong around your heart

Trees grow from the heart outwards.
Maybe we should be more like trees.

The Dagda smiled a broad happy smile and placed this figure on his high shelf with the others. He brushed the shavings into the flames where the fire happy took to munching upon them.

Maybe people also grow from their stomach he thought, as his rumbled hungrily at him.