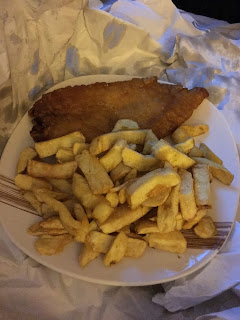 "Right there folks, Lets go now! Move it on there now folks!"

The loud drawl of the security man calling time is a thing often heard. Even in Ireland bars do have to close at some point.

I downed the last of my pint and rose to don my coat. My companion slipped nimbly to his broad feet despite his large size, the full pint still in his meaty fist.

"You right there Big D? Need to leave that one behind do you?"

His dark eyes met mine with just as much mischief.

" You know me better than that, never leave a good one standing alone."

So saying he raised the pint to his lips and with a tilt of his head an opening of his mouth he poured it down in one go, leaning back near fit to fall.

As the he stood straight again he placed the now empty pint glass down with but the smallest of wobbles to his balance.

"Right lads, finish up there now!" called the security man as he purposefully strode past.

"Right you are sir, on the way there now!" replied my companion matching the mans tone and volume exactly, so much so, that the security man broke stride to shoot us a quick glare.

Shaking my head with a chuckle I moved my companion on towards the door and out into the cold winter January night.

"Chipper?" I queried pointing over my shoulder to the nearest take out joint.

"Sure. I will have a battered fish. I don't pay for any of that slave food."

My eyebrows must have shot up to show my confusion at his remark.

I found no reply as He trundled on past me in his rolling gait.

We entered the chipper, out of the cold into the fryer scented warmth, my glasses steaming up in an instant, and placed our orders. Smoked Cod for him and a Large chips for me, heavy on the salt an vinegar.

Stepping back outside, with hot food in hand we took a lean against a nearby store front to eat. I tried to wait patiently knowing that he had heard my question, but at times patience is not my strongest virtue.

" Are you going to explain that last remark or what?" my tone indicating that no dissembling would cut it this time.

His dark eyes met mine as he chewed through his current bite off fish under the street light. With a swallow his eyes fell on the brown paper bag in my hand.

I felt my brows furrow as I tried to think my way around the few pints we had shared to a logical comprehension, eyes looking down in the bag, nose full of the tasty scent, one long chip hung suspended between the bag and my mouth.

"Oh come on now lad, find the Why, no more than 6 pints in you an you're stumped? Slave food. That vegetable was the near death and destruction of our people.

Not native to the island is was brought from the Americas and introduced here by the conquers. Cheap and hardy so it was, growing in almost any patch of dirt it can and as such a stable item to feed the folk of the land, when the more valuable bounties, grown here of the land by its people, were taken to line the pockets of the conquers"

His tone hard with a controlled anger, he looked off into the night, not seeing the cars rolling past, nor the tall buildings around him.

"Over a million taken by an Gorta Mór and another million of the folk scattered all around the world. The land bereft of her people, the strong blood of her, sent out to risk the trials of travel, clutching to naught but hope and the strength of their own Will to survive.

Food there was. Food enough here on the island, but not for her people was it. Oh no. Taken to the conquers land, their laws protecting the wealthy and strangling the prices so a the working folk could not afford to feed their starving wee ones."

His big eyes blinked quickly as his gaze returned to the now.

"The Fate of the land was forever changed  by as small a thing as a fungus, and the greed and ignorance of humans.

1 in 4 survived the Big Hunger. The Tough. The Wilful. The Smart. Those with heart enough to fight for life."

He looked to me then, the anger cooling in his gaze.

"I don't know what would have been, but I tell myself that maybe, just maybe, the world is better because that Heart, the beating battling blood of the people can now be found all over. Standing tough and Willfully. Not bowing nor broken nor conquered. Fighters and survivors."

He looked at me, those deep dark eyes seeing down into me.

"Always know where you come from and why you choose to do a thing. You will always be accountable to your own Heart no matter what any other may think."

I looked down at that one chip, suspended between the bag and my mouth. Appetite leaving me I dropped it back amongst the rest of the hot salted potato.

"I don't think I can finish these now."

So saying I began to turn toward the nearest trash bin, when like lightning his big hand snapped out, snagging the bag.

By the time I spun on him he had already stuffed four or five chips into his mouth.

"What?" He mumbled around a mouthful of delicious salted potato.

"I said I wouldn't pay, not that they weren't tasty."

He accepted the punch in the arm I gave him and his laughter followed me as I trundled back to the chipper to buy some fish.

I guess at least I now knew the Why...