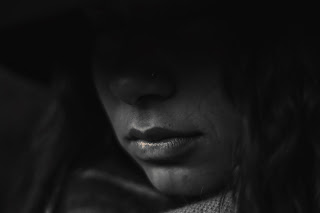 Many knew of their dalliances, those stories of coupling and her gifts of prophecy and favor. Many more of their rivalry, the clash of their Wills again and again as each worked for balance.
Few there were beyond the two that knew of their relationship.

She came to him out of the darkness, the quiet comfortable black that exists between all things of light. Unlooked for, uncalled for, she moved closer. She Knew.

Her bare feet took her on the ways, leading her to him unerringly, without falter. Past his rath, for home would not bring him comfort. Past his flock for he would not find peace being among them. Past his workshop for there was no focus left to him.

Her feet felt the grass, her nose took in the scent of the tree, and her ears the labored breathing from beneath its roots. As she approached the dark entrance to the earth beneath, the tree shuddered under her hand as if some great blow had impacted it.

As she stood one foot on the threshold of the hollow, her Will gathered to her, she could not escape a shiver of apprehension somewhere in the recesses of her mind.

Countless foes she had slain, fools she had humbled, heroes she had claimed. At her call stood a host of ruin fit to break the world. Change was her dominion in all its forms even onto the final change of utter destruction. All of the forces and strength gathered to her Will, all in her control.

Yet still in some primal spot she held a shudder just in check when she thought of Him.

He was here and He was in his darkness.

Slipping silently beneath the earth she felt the tree shudder again, a root deep shake as it absorbed the energy and dissipated it through its ancient feet and into the earth.
Shifting into the space she heard him first. Breathing labored and heavy. Each exhalation ending in a deep throated growl. Body moving in the confines of the space. Feet scraping the soil, shoulders rubbing against the inside of the tree, big broad strong hands gripping and scratching the wood.

Next her nose took up the scent of him, so similar to that of the earth itself it still had a distinct tone to his sweat which she could never mistake. Breathing deep she inhaled the scent of blood, rich and metallic. His blood.

Her heart pumping hard she was stirred in many ways. The heady coppery smell filling her and causing a different shudder she could not suppress. Her intent shifted slightly in response to that feeling.

In the darkness, the labored breathing stilled abruptly, and a heavy silence fell. Like some beast scenting prey she heard him snuffle the air. Letting her eyes adjust she saw his shape, broad and muscled, still and poised in the darkness, head up and to the side, to catch the smells around him.

That primal shudder skittered across the back of her mind again to see him so, yet this time her reply was a smile, all teeth and aggression.

Her moment was near. She would have to time it right, strike when she had her opening or leave him to his darkness. Her eyes, blacker than the dark about her, weighed him, mind flickering back and forth on every detail as she reached her moment.

With a second to tense and target her Will, she lept. Sailing out of the blackness she landed upon his back, arms locking around his bull thick neck, her strong legs wrapping tightly about his waist.

In the moment of contact she felt it all, the echo of which had brought her to this place. Rage mixed with pain roared its way into her awareness. A crashing wave of sensation that would drown anyone foolish enough to be unprepared for its wroth. The red and blackness of it all swirling about her mind as she sought deeper within him, searching for the cause.

His reaction was instantaneous, throwing his weight forward with a roar, frenzied and animalistic, trying to dislodge her. Thrashing his mighty shoulders back and forth. Her strength held and with a squeezing of her arms and thighs she denied him his breath.

His thrashing did not ease, only intensified with the loss of air. She felt her skin scrape against the the earth and tree roots around her, but the pain it caused was funneled by her Will adding strength of her grip.

With a gasped growl, he  finally slumped to one knee, big arms out and braced against the interior of the tree.
Loosing her arms she let him breath and clamped an iron grip with her hands upon the broad meat of his shoulder muscles. A hiss escaped him as her fingers pressed deep into the locked knotted flesh across his collar bones.

The words when they came were a hushed angry growl from a throat that had not uttered a clear word in hours.

Ignoring him, she drove her strong fingers against his flesh, working, kneading, releasing the pressure where she found it.

As her body worked his flesh, her senses searched his energy. The storm within him began to ease as the pain she caused him relieved the pain which he held to. The red rage began to fade in him as his great arms slumped low, the blood on his knuckles, dripping into the soil.

Still, she did not relax her muscles, legs tight to him, body pressed to his, her cold skin taking the heat out of him as his breathing steadied to a slow even pace.

Her eyebrows moved to a frown as the blackness did not stir, but deepened in its stillness within him, taking a hold.

Leaning in close, arms loose around his neck she placed her lips close and breathed huskily into his ear.

“What? All that fight gone from you now?”

So saying she sank her teeth into his scarred ear, biting hard and sending a spike of red back through him.

With an answer growl he moved, and she allowed him shirk her over his shoulders and into a crushing embrace. His mouth found hers and the pressure of his kiss crushed her lips to her teeth, the strength of his grip bruising her flesh, and the hunger of his need washing over her.

She accepted it and gave equally, her hunger in return.

Their coupling was fierce. All flame and power coursing one against the other. Muscles pressing and straining. Skin sweating against skin. His weight crushed down upon her as he moved within her. Their pace frantic as they pressed themselves together each simply feeding their need with the others flesh.

Their labored breathing intermingled with gasps and grunts could lead to only one ending and in that moment of explosive release, they roared as one.

As  he drew deep on his next breath, his arms gave and he lay forward onto her. Her arms came up and around his wide shoulders as she held him against her, each working to steady their breath.

Deep within him, the blackness had shifted, the red of the anger having burned it back. In its center she found a whiteness. The space where peace and calm ruled. With that she found her smile, warm and genuine this time.

Moving her hands she lightly scraped the skin across his broad back , tickling the hairs there.

The hiss that escaped him this time was one of happy pleasure, and he raised himself up to meet her gaze.

“ I have told you lass, no one touches my shoulders.”

Mischief sparkled in her eyes and her smile broadened.

“Its lucky that I’m definitely a someone to you then, otherwise you would be lost and I would have no one to play with. No one decent anyway.”

His chuckle rumbled up from his broad chest and she felt his normal warmth enfold her, comforting and close.

She didn't ask because she already knew, and he didn't thank because no words would ever be big enough.

When next their lips met it was soft and gentle, intimate and caring. Their bodies began to move again, but this time with a slowness to match their kissing.

Three words were all that followed.